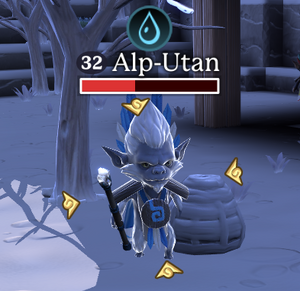 An Alp-Utan attacks from a distance with Ice blasts from its staff. Upon reaching 50% health, the Alp-Utan encases itself in Ice, making it immune to all damage for a short period.

The Alp-Utan will attack immediately after it's ice shield falls, and will continue to do so until defeated.