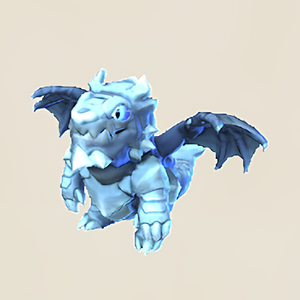 The Arctic Dragon Countess has 3 attacks in total, as well as Frozen Saurian minions summoned in as help. Her first attack shoots eggs directly at the nearest players position. The amount of eggs shot will be equal to the number of players on the island. The second attack is very similar, but will shoot an additional egg, which will instantly hatch into a Frozen Saurian, which will start chasing the player. The two attacks will cycle until the countess is stunned, with the first attack happening twice followed by the second one once. The final attack comes after the Arctic Dragon Countess receives damage and regains consciousness​. She charges up and shoots a frost ray straight at one of the players.

Upon arriving at the Ancient Glacier, you will have to navigate by 3 projectile shooting machines to gain access to the drop hole into the boss arena below. While the first and the last allow you to pass by effortlessly, the middle one has special alcoves in the walls for you to hide in. Once you are in the arena, an egg will be waiting for you on the platform. When it is hit, it will fly off the platform and the Arctic Dragon Countess will spawn, flying from beneath one of the sides. You must wait until she attacks and then dodge the eggs until they land on the ground. Simply wait in the middle of the platform for the dragon to spit the eggs at you, then roll over to the sides. After an egg lands, you can hit it to throw it off the platform. Your goal is to hit the Arctic Dragon Countess to stun her. If you don't do it within the first two attacks, the Countess will throw an egg that will instantly hatch, and a Frozen Saurian will spawn in its place. It's advisable to kill those right away.

After successfully hitting the Arctic Dragon Countess with an egg, she will pass out grabbing onto one of the ledges. When she does so, run to her and activate your War Cry and Poison Rain II spells. If you have any Frozen Saurian still on the platform with you, quickly kill them before hitting the Countess. Also, be wary that any eggs you will leave will summon Frozen Saurians once she regains consciousness. However, the boss should be your main target. Mages should zap her with the Masterwork Lightning spell as much as possible, while other classes make a full frontal attack with their weapons.

When the Arctic Dragon Countess begins to regain consciousness, split up your party. Have one member stay close and on one side (for instance on the right) while all other members go far away from the boss, on the opposite side. The dragon will charge up a ray which can be an instant kill if no magic protection or consumables are used. It is advisable for the player that is taking all the damage to drink potions, use healing spells as well as collect Health Orbs left by the Frozen Saurians as it is the only way to stay alive. After the Arctic Dragon Countess finishes the attack, the entire cycle will repeat.

Once the Arctic Dragon Countess has been defeated, the loot will fall from the sky and land around the center of the platform similarly to the Dragon Queen.

There is no exit portal for the Arctic Dragon Countess, so you must portal back out using the map screen.