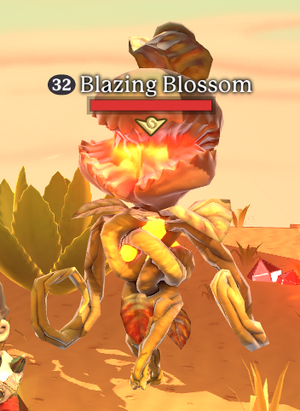 Once the Blazing Blossom is in range, it will spit out a fireball. The fireball is very fast but travels in a straight line. You can tell the attack is coming by the fact that the creature rears its large head in a very obvious tell. At that time you should dodge continuously to the side until the fireball has passed. Most signigicantly, the Blazing Blossom will explode when killed. in doing so, it will cause significant damage as well as excavate a 3x3 area! As such, it is the only creature that can damage player created structures.

The Blazing Blossom can be found on the following islands:

The Blazing Blossom also appears on any island during the Blossom Madness event.