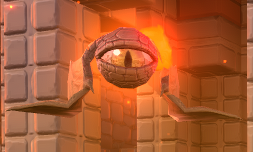 Bomb Gazers are eye-like enemies that fly around and attempt a kamikaze style bombing attack on the player. If it makes contact, it will explode dealing considerable damage and dropping no loot. You can recognize a Bomb Gazer from other Gazers by the fiery glow it emits.

Bomb Gazers are quite fragile. They don't have much stamina and can fall in battle after few hits.

In dungeons, be wary as they will sometimes be right behind the next door and attack before the player has a chance to realize what happened.

It is best dealt with from a distance but if playing a Warrior the player can use a spell that first stuns the enemy before attacking it. Another option is to dodge the bombing run and attack before the Gazer has a chance to reset for another run.

Note: The Bomb Gazer will not drop anything if it self-destructs on the player.

Bomb Gazers can often be found in structures in volcanic islands, in dungeons, and broken castle remains. They are not specifically credited on the monster summary page of an island.