The Boulder Golem is a greenish Golem that can be found on tropical islands.

The Boulder Golem is fought in three stages. First, it appears as Boulder Golem that once defeated turns into a pile of stones from with a smaller Rock Golem will arise. Once that one is defeated and turned into two piles of stones, two little Pebble Golems will arise. After those two have been defeated, a pile of rocks will explode into the different drops.

Just like all other Golems, all stages of the Boulder Golem have two attacks: First, they will walk towards the player and once they are close enough, they will punch the player with their fists. For their second attack, they will jump onto the player from a distant trying to make damage by squashing them.

Both attacks are easy to evade by moving around and dodging/rolling at the right moment. Running around the golem in a circle and attacking it is good for melee damage from the Warrior. Rangers and Mages can beat the Boulder Golem from a distance and just need to be careful with its second attack. 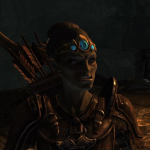