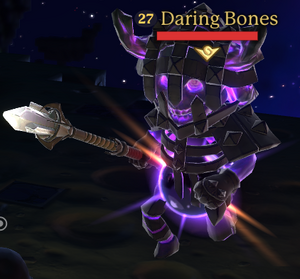 The Daring Bones has one attack in which it spawns a beam of dark energy using its staff. Evading this move is easy as it telegraphs its attack by drawing back its staff for a second before launching giving the player ample time to dodge. Dodging to the side is the easiest defence. Melee characters can simply hit the enemy when it is not attacking, and ranged characters can take advantage of any open space to attack it from outside of its attack range.

The Daring Bones can be found on the following islands: