The Fallen Wizard is an aggressive creature and will attack a player on sight.

The Fallen Wizard has two attacks, both magical. One attack is a swirling, targeting pile of bones that follows the player and can travel through closed doors. Evading this attack requires constant movement for several seconds while the spell is active. The second attack is a targeted spell which can be dodged. Regular weaponry will not kill the Fallen Wizard, only stun him for several seconds. He will revive afterwards. The only way to permanently kill the Fallen Wizard is to finish him off with a weapon or spell that deals "Light Elemental Damage" such as the Immortal Gold, Light Bomb, Golden Archstaff, Hollow Crescent, Divine Judgement or Celestial Wrath 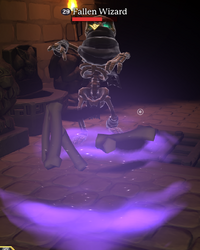 The Fallen Wizard can be found anywhere in Moon biome dungeons. It is not specifically credited on the monster summary page of an island.