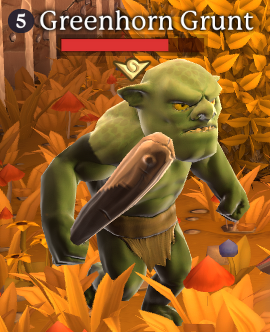 The Greenhorn Grunt will attempt to walk towards the player and batter them with one swing of their club. In order to successfully dodge, sidestep or dodge roll to the sides while it lifts its arm to swing. Once they flee, Rangers and Mages will have an easier time finishing them off due to their ranged attacks easily tracking the target, whereas Warriors may have trouble landing a single hit due to the the enemy's erratic and quick movement.

The Greenhorn Grunt can be found on the following islands:

The Greenhorn Grunt also appears on any island during the Grunt Army event.