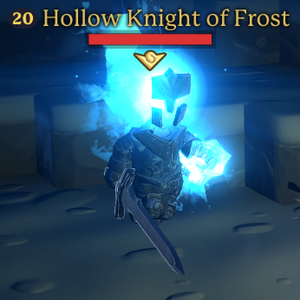 This enemy has two attack patterns. Upon sight, it will walk towards the player. Once it gets close enough, it will launch a bolt of magical ice energy. If the player is close enough it will swing a sword in an attempt to strike the player. Both attacks can be dodged quite easily. also after you dodge its magical ice energy attack a number of times without killing it, it will turn monsters around it into duplicates of itself and the clones are capable of doing the very same thing to other monsters in close proximity.

The Hollow Knight of Frost can frequently be found on arctic type islands at night. It is not specifically credited on the monster summary page of an island but can be seen on these: