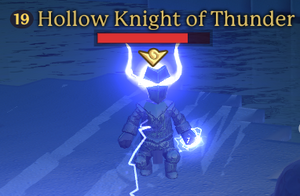 Hollow Knight of Thunder are one of the many Hollow Knights variety. As with all Hollow Knights, it only appears at night and in this case mostly on jungle and hills type islands.

This enemy has two attack patterns. Upon sight, it will walk towards the player. Once it gets close enough, it will create a lightning bolt that arcs to the player. Though the bolt of lightning automatically connects, it does not follow the player so it is possible to walk away. Standing in the arc will cause damage. The second type of attack is an energy dome type aura that spawns at the player location and causes continuous damage until the players moves away. There is time to move before the damage begins.

It is best to fight this monster from a distance, using your dodge to avoid its attacks while shooting it with magical or physical projectiles. If you have melee weapons you should attack in the time between its blows. The knight telegraphs its attacks so you have enough time to get ready to dodge it when it does attack.

The Hollow Knight of Thunder is not specifically credited on the monster summary page of an island but can be seen at night on these: