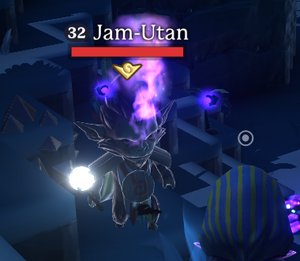 Jam-Utan are elusive creatures found in tropical environments. They also appear during several Events such as the Thunder Rain Storm Crystal Event.

Jam-Utan Will throw balls of electricity at the player as his standard attack. On first sight, as well as after two attacks, Jam-Utanwill teleport towards the player. Shortly after teleporting, it will attack if the player is nearby.

Between two seperate attacks there are long periods when Jam-Utan will stand still, doing nothing. These provide an easy window to damage them.