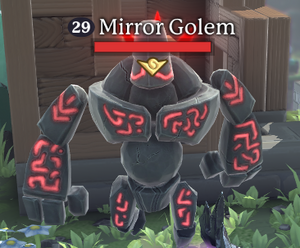 It looks like a rock when you’re not around it so watch out.

It will occasionally shoot its fists at the player.

When defeated it will look like a rock but won't attack you. You can break it and get various resources such as stone blocks, mana, health, portal shards and experience points.

It can mimic the player’s elemental attacks, using them in its advan