Pyr-Utan is only found in the events like Tomb of C'Thiris, Tropical Rain Storm or Sand Storm. They will attack the player on sight.

Pyr-Utans will protect the treasuries found in C'Thiris' Tomb. They have only one attack which shoots orbs at you, which can be easily doged. When low on health, Pyr-Utan will slowly raise up in blue light. If the C'Thiris curse is not lifted, he will suicide, leaving a blue skull behind. This move will increase the curse meter by a substantial amount, so it's best to finish them off before that. 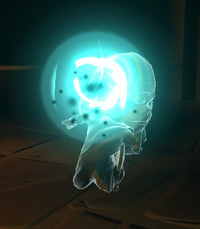