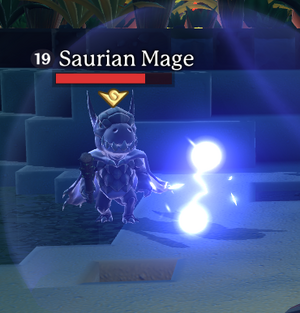 The Saurian Mage is an aggressive creature and will attack a player on sight. The creature has the ability to jump-dodge attacks.

Saurian Mages will fire electro energy orbs at the player. Those orbs are moving slowly towards the player and will deal shocks if they get close enough. Simply staying away from the orbs as they travel will avoid any damage. An orb can deal a lot of damage to the warrior class, so the best way to avoid it is to roll towards the Saurian Mage. The orb does not deal damage for 2 seconds right after being summoned, giving the player enough time to roll away.

When fighting multiple Saurian Mages at once, it is best to try and synchronize their attacks in order to stretch out the window of vulnerability for as long as possible. To do so, one can make use of the Saurian's tactic of jumping away from the player. As the orbs will only be used when players are close enough, separating a group of mages can allow you to somewhat control when they will attack. This is necessary to not get damage from 3+ mages.

Saurian Mages can be found on the following islands: