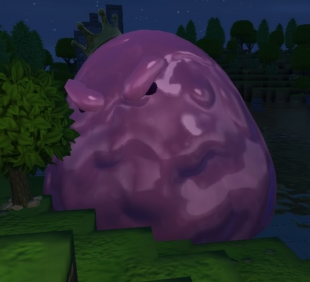 The Slime Queen is the first mini boss the player will encounter. It can be found on the level 7 island of Port of Caul.

If a player builds a column of blocks high enough, the Slime Queen won't be able to reach him, therefore allowing player(s) to safely damage the boss. This, however, will not work for Warriors, as they require close combat.

It does appear the level 7 Slime Queen in Port of Caul has different drops than the level 14 one summoned with Slime Queen Amulet of Invocation.

-The number in () indicates which level the Slime Queen drops the item.-