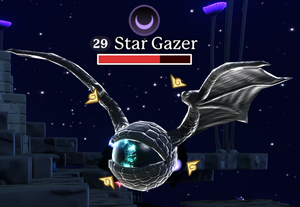 Star Gazers are eye-like enemies that fly around and attempt to blast the player with dark energy. They lurk on the surface of most moon type Islands.

Star Gazers are quite fragile. They don't have much stamina and can fall in battle after few hits.

They are best dealt with from a distance but if playing a Warrior the player can use a spell that first stuns the enemy before attacking it.

Star Gazers can often be found on the surface of moon type islands. They are not specifically credited on the monster summary page of an island.